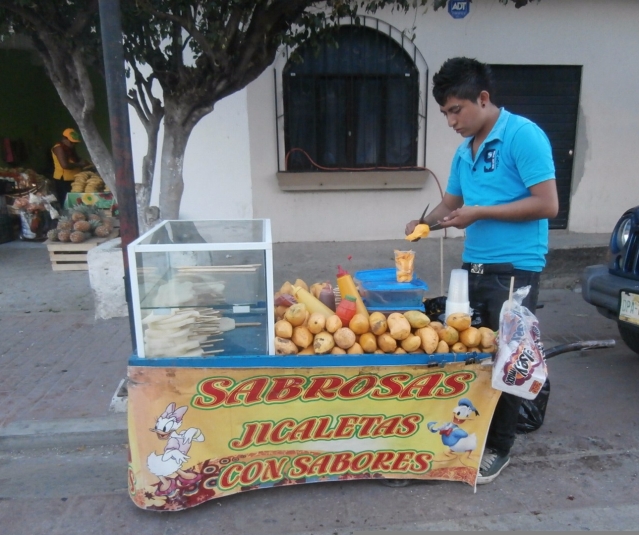 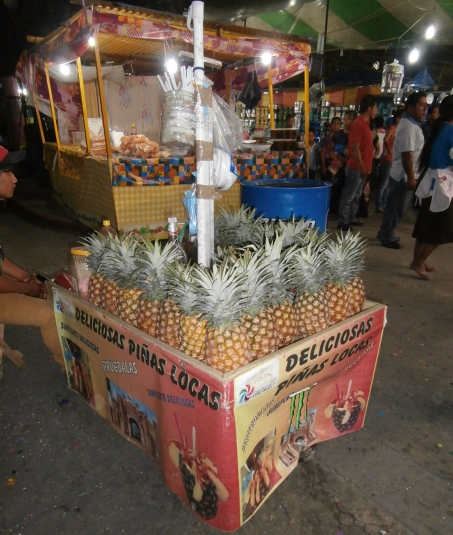 Deliciosas piñas locas at a fair

This double-spread image for my colouring book shows a typical street. I had in mind Almolonga here in Sancris, with its verdurerías (greengrocers), carnicerías (butchers) and abarrotes (corner shops). I also wanted to draw someone who pulled up next to me at a red light once: a young mum with her two kids, all on one Italika vespa, all wearing their favourite helmets. It’s typical here to see whole families on vespas but normally the driver is a man and nobody has helmets on.

And the third element is the fruit salad guy with his portable stall (a tooled-up wheelbarrow). You see these guys on street corners selling varieties of fruit in a cup. The jicaletas in the picture are slices of jícama on a stick, with a lick of jam or chili. You see juice guys, the orange-juice people with a nifty little orange-lathe for peeling. The mango seller uses a useful no-hands innovation for mango peeling: you stick a sharpened screwdriver into the base of the fruit and peel.

This is what the drawing looks like in the book; what it looked like when I was halfway through colouring it, and the final product.
You can buy the PDF print-at-home version of the whole colouring book on my Gumroad page. 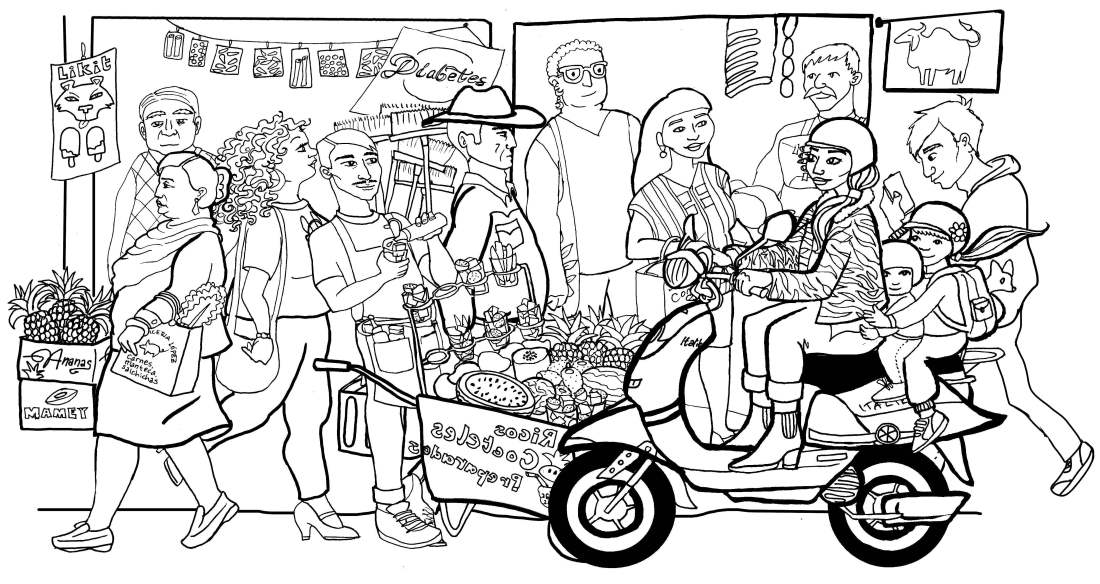 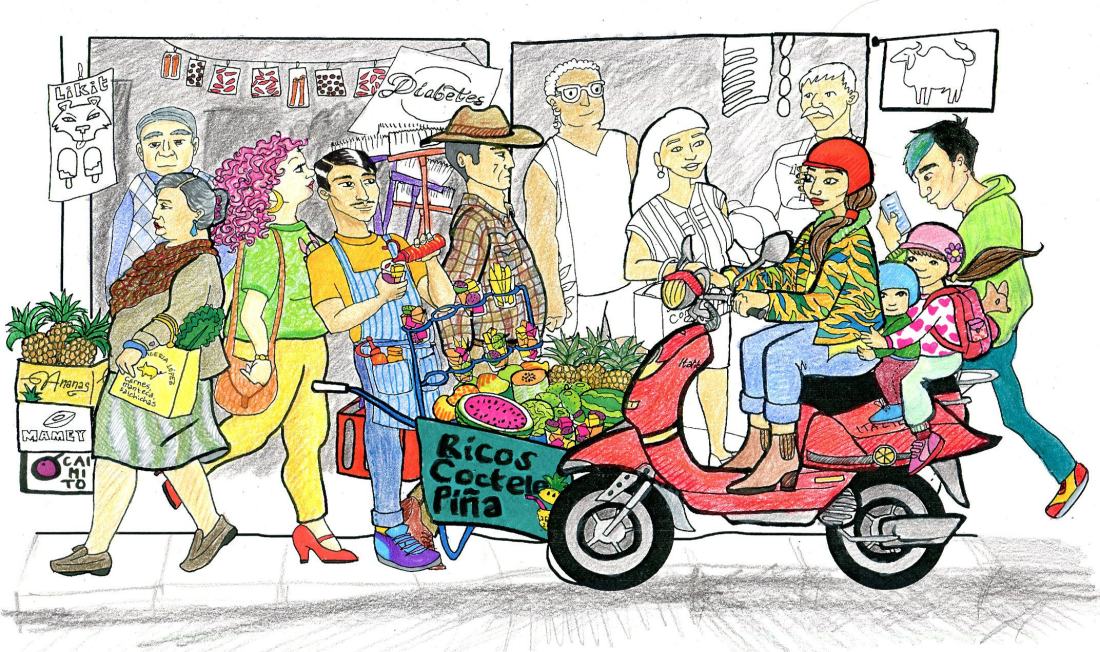 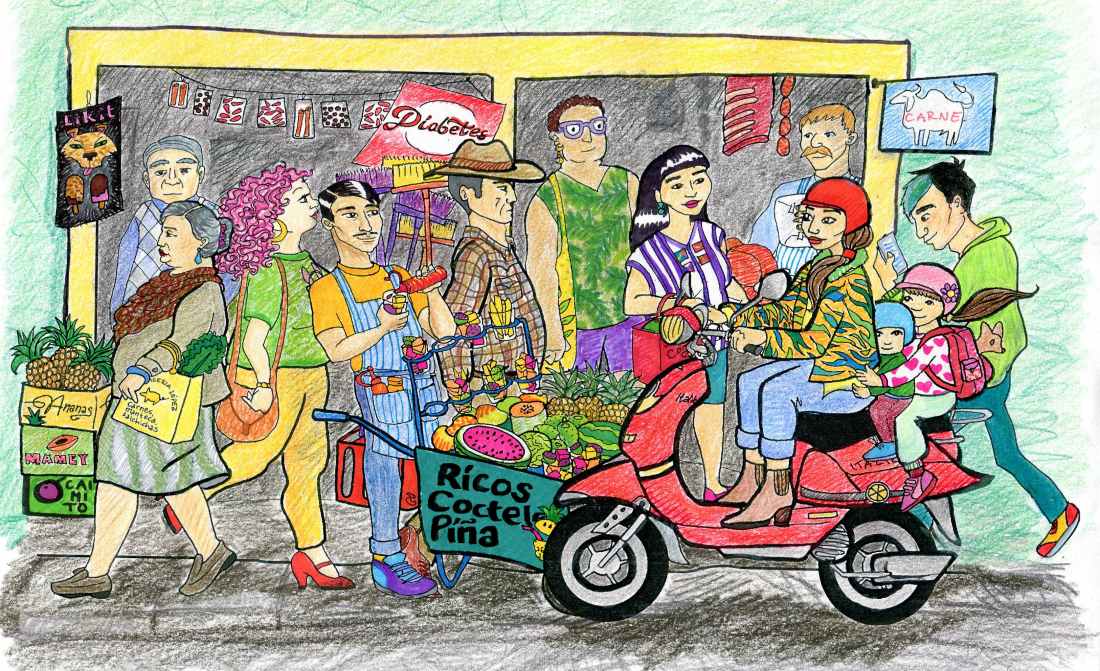 Just because I’m publishing a colouring book doesn’t mean that it doesn’t come with references!

I’ve found in-depth background for my drawings in these excellent books. (You can find many of them at the bookshop La Cosecha.)

Segunda edición, Colectivo Bats’il K’op, San Cristóbal de las Casas 2017. This is a masterpiece about Sancris, covering the city’s history through its architecture, using poetic language and solid sources. Although it doesn’t try to entertain it often does, with anecdotes like the fine ladies’ church strike when the Bishop tried to stop them drinking hot chocolate during Mass. I used it for points about the orientation of the town, San Nicolás being the church of the black residents, the eggs in the stucco of the Cathedral, and la Merced (including the detail about the disturbing-sounding institution for detaining “obstreperous women” that was run on the square in the 1700s.) A lot of the decisions taken here at the city’s initial founding are still relevant today, such as the orgins and crafts of the different barrios. Since Sancris is an old, colonial city (only the second founded by the Spaniards in the Americas) we tend to look around the pretty centre and think that this is what it’s always looked like. But Aubry writes about things like the shifts in colour from the mudejar (Moorish) to the Neoclassical styles, reminding us that nothing is immutable.

Segunda edición, CONACULTA y Na Bolom, Ciudad de México y San Cristóbal de las Casas 2014. This photo-packed book charts the different local indigenous weaving styles with a tongue-in-cheek commentary that comes from real earned insider knowledge. I especially enjoyed the tidbit about the cardigan being introduced to Chamula by evangelican fanatics trying to bribe their way into peoples’ faiths. I used the book for the information about the embroidery from Zinacantán. Morris et al tell us that the striking Zinacanteco flower embroidery was inspired by Guatemalan refugees who came through in the 1970s. Again, you look at something that looks traditional and assume it’s always been that way… The flower designs on the Zinacantan family’s clothes in the colouring book are my own improvisations.

Museum of New Mexico Press, Santa Fe, 2004. I came across this scholarly book in Oaxaca and bought it for big money. Guess does a great job of cataloguing San Cris’ roof crosses and talking to their owners and blacksmiths about them, but she doesn’t actually manage to get to the root of where they came from and what they mean.

Culturales, 3(2), 181-207. Instituto de Investigaciones Culturales-Museo, Mexicali Here’s an article about Coleta women talking about their houseplants. Coletos is a name for the locals, but it’s fraught with meaning: it refers to the dominant class who’ve lived in San Cristóbal for centuries and claim Spanish ancestry. When the Zapatista rebellion took San Cristóbal in 1994, three civil society movements arose in response: two in favour, and the grouping los Auténticos Coletos, against. Our other neighbours are known as Sancristobalenses, meaning locals who don’t consider themselves coletos, and foraneos, or “outsiders” like me who come from other parts of Mexico and the world. The article about the plants also gives insights into how traditional houses are organised, with their central patio for decorative flowers and their backyard “sitio” for urban farming – and how the subdivision of houses as families grow makes this trickier.

I haven’t read these other books yet but they are very intriguing. Zapantera Negra contains stories by Black Panthers who have visited the Zapatistas in solidarity – the urban-rural clash came out very vividly in one of the testimonies I read, with the aged Black Panther being expected to ford streams and balance on narrow mountain paths. ¿Dónde Están? or Where Are They? is about Afromexicans.
You can buy the PDF print-at-home version of the whole colouring book on my Gumroad page.

For the past three years I’ve been chipping away at a little project of mine: a colouring book featuring street scenes from San Cristóbal de las Casas in Mexico, the picturesque town I live in. There’s so much detail and colour going on that it’s hard to take much in while we stroll around… apple blossoms peeking over a wall; a house painted in turquoise and peach; Chamula women’s blouse embroidery fashions; a courtyard from the 1500s; a garage opened to sell multicoloured pastries; the breakdance crew at La Merced; street dogs rolled up to sleep; the spectacular piercings of an Argentinian hippie.

With this colouring book, I want to give us fans of Sancris a chance to sit down and contemplate it, one scene at a time. And here we can finally paint a house in magenta and purple.

I’ll be distributing in independent bookshops in Sancris. You can also buy the PDF print-at-home version of the whole colouring book here on my Gumroad page.

A sketch for something bigger… 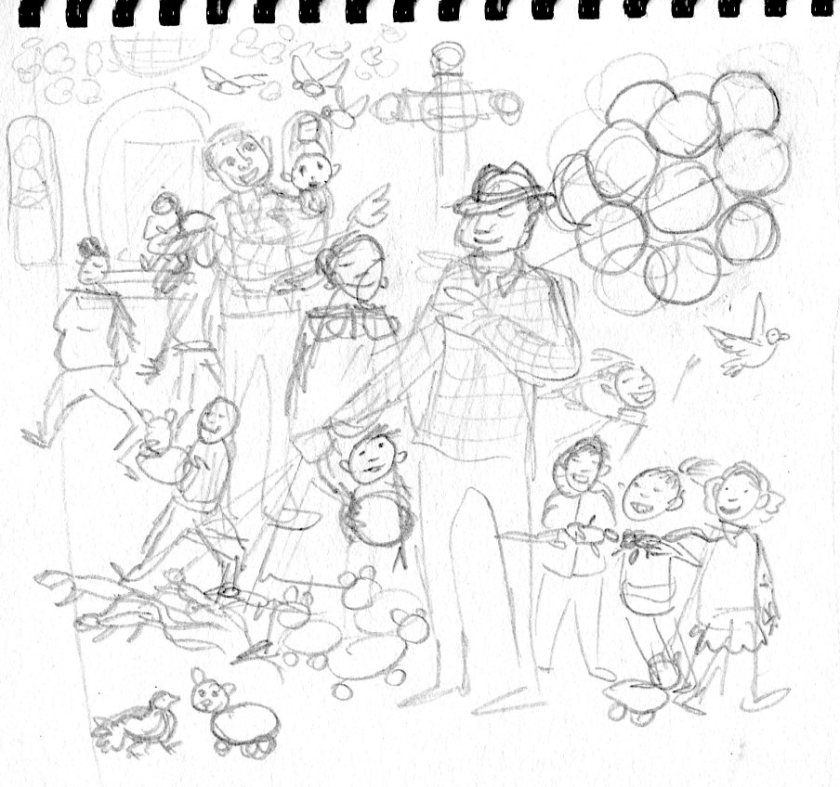 Raw from my sketchbook.

I’ve tried my own medicine and coloured another one of the bible stories from the young people’s Bible knowledge book I drew picture for last year. Jesus is having coffee and cake with Zacchaeus and his wife. 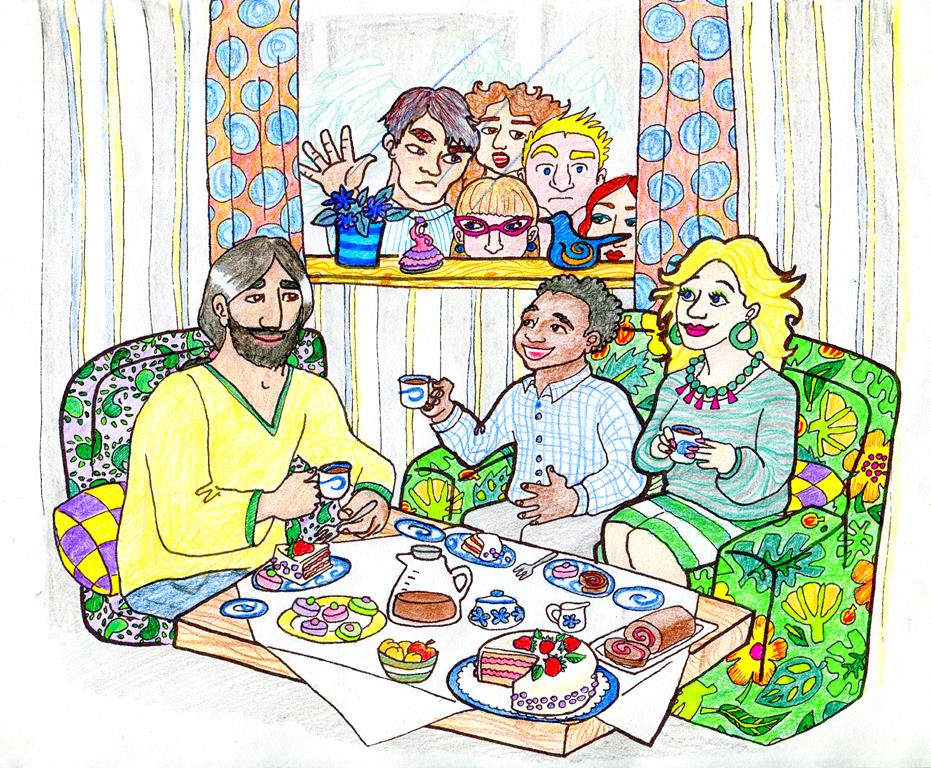 The fun part of colouring is that you can rejoice in sofa upholstery that you’d never allow into your own house.

The book whose cover I drew, “Mujeres Situdas: Las Parteras Autónomas en México” is out now on Amazon! Go ahead and buy! 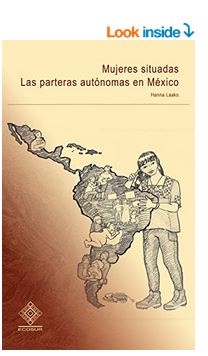 I tested a printout of the colouring-in pictures that got published earlier this year, and this is how it turned out:

I had a go with all my tools: watercolour, aquarelle crayons, conference markers… but ended up sticking just to colour pencils and Stabilo Fineliners.

I tested my own product, the Bible activity package “Painiva Jumala”, by colouring in some of the “Genesis” picture. I didn’t really get into the advertised Zen mindset, but it was fun. 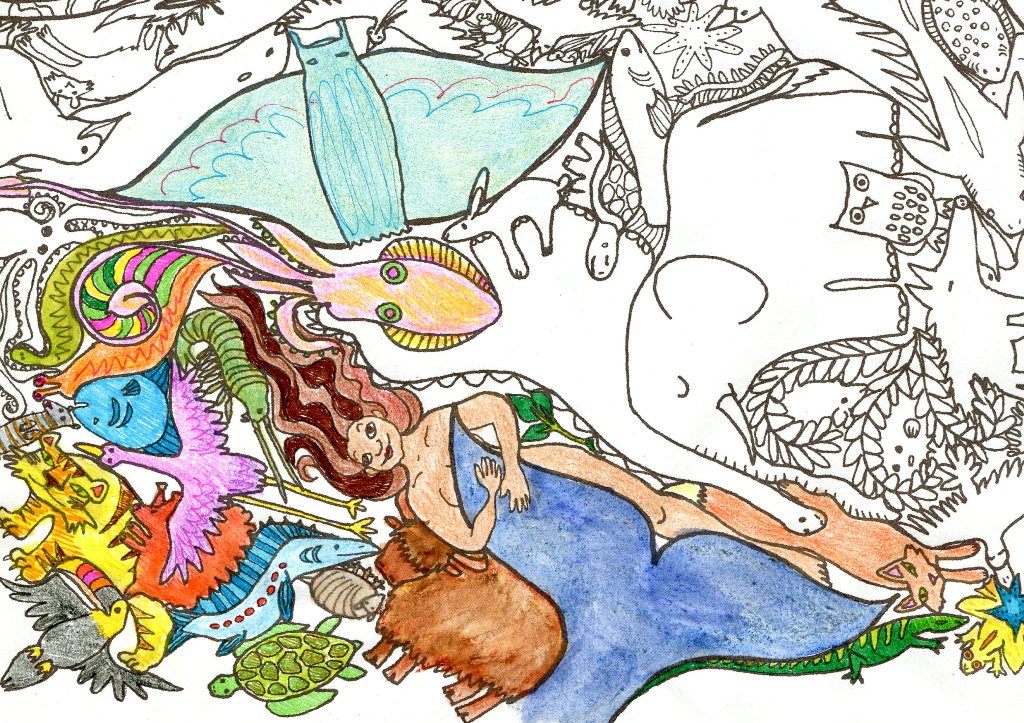 What colour should the dinosaur be?

I’m working on the cover illustration for Hanna Laako’s book about midwives, “Mujeres situadas, la partería autónoma en México”. Coming out soon at an Amazon near you! 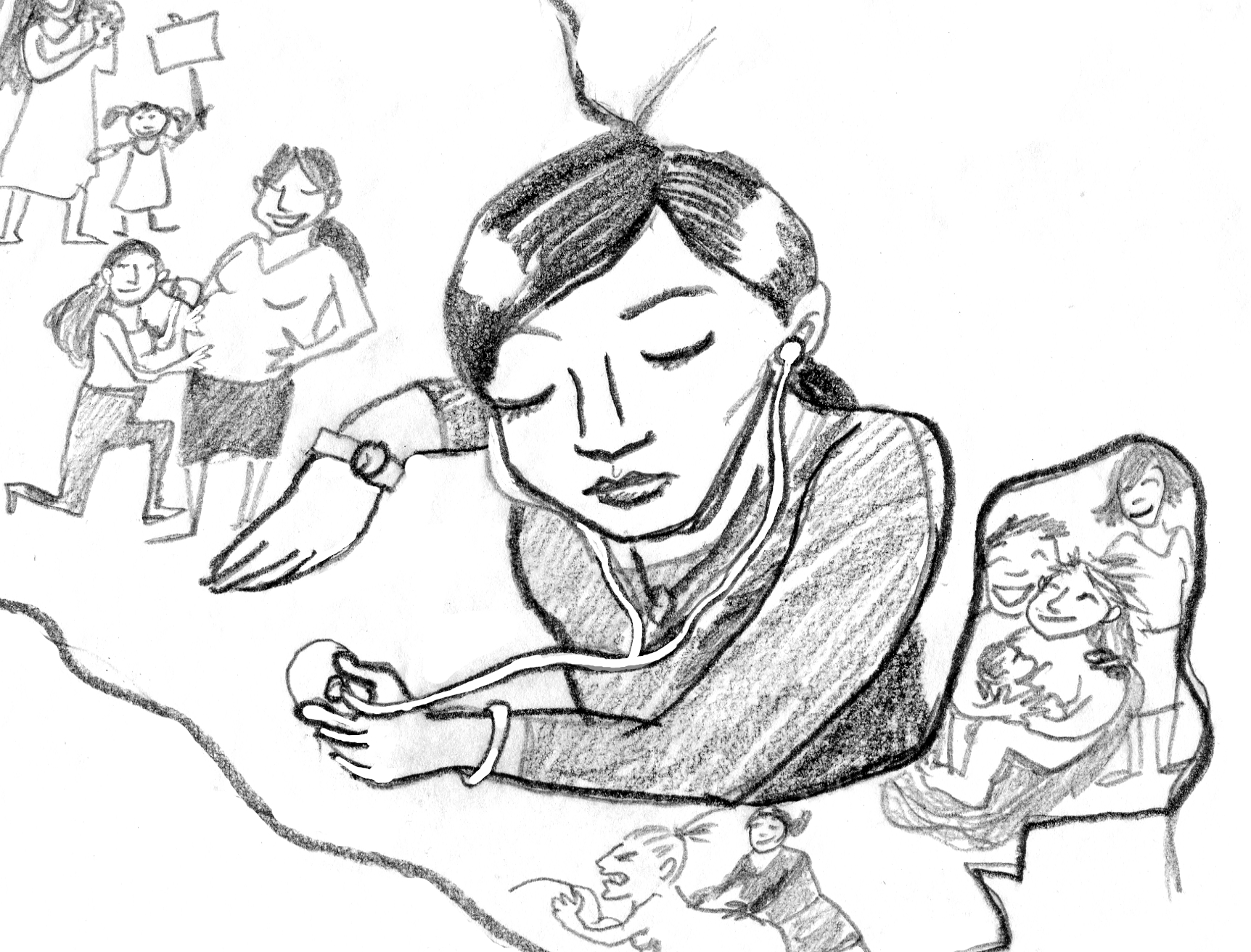